The term cluster validation is used to design the procedure of evaluating the goodness of clustering algorithm results. This is important to avoid finding patterns in a random data, as well as, in the situation where you want to compare two clustering algorithms.

In all the examples presented here, we’ll apply k-means, PAM and hierarchical clustering. Note that, the functions used in this article can be applied to evaluate the validity of any other clustering methods.

In this section, we describe the most widely used clustering validation indices. Recall that the goal of partitioning clustering algorithms (Part @ref(partitioning-clustering)) is to split the data set into clusters of objects, such that:

Internal validation measures reflect often the compactness, the connectedness and the separation of the cluster partitions.

Generally most of the indices used for internal clustering validation combine compactness and separation measures as follow:

In this section, we’ll describe the two commonly used indices for assessing the goodness of clustering: the silhouette width and the Dunn index. These internal measure can be used also to determine the optimal number of clusters in the data.

The silhouette analysis measures how well an observation is clustered and it estimates the average distance between clusters. The silhouette plot displays a measure of how close each point in one cluster is to points in the neighboring clusters.

For each observation \(i\), the silhouette width \(s_i\) is calculated as follows:

The Dunn index is another internal clustering validation measure which can be computed as follow:

The aim is to compare the identified clusters (by k-means, pam or hierarchical clustering) to an external reference.

It’s possible to quantify the agreement between partitioning clusters and external reference using either the corrected Rand index and Meila’s variation index VI, which are implemented in the R function cluster.stats()[fpc package].

The corrected Rand index varies from -1 (no agreement) to 1 (perfect agreement).

External clustering validation, can be used to select suitable clustering algorithm for a given data set.

The following R packages are required in this chapter:

We’ll use the function eclust() [enhanced clustering, in factoextra] which provides several advantages:

The simplified format the eclust() function is as follow:

To compute a partitioning clustering, such as k-means clustering with k = 3, type this: 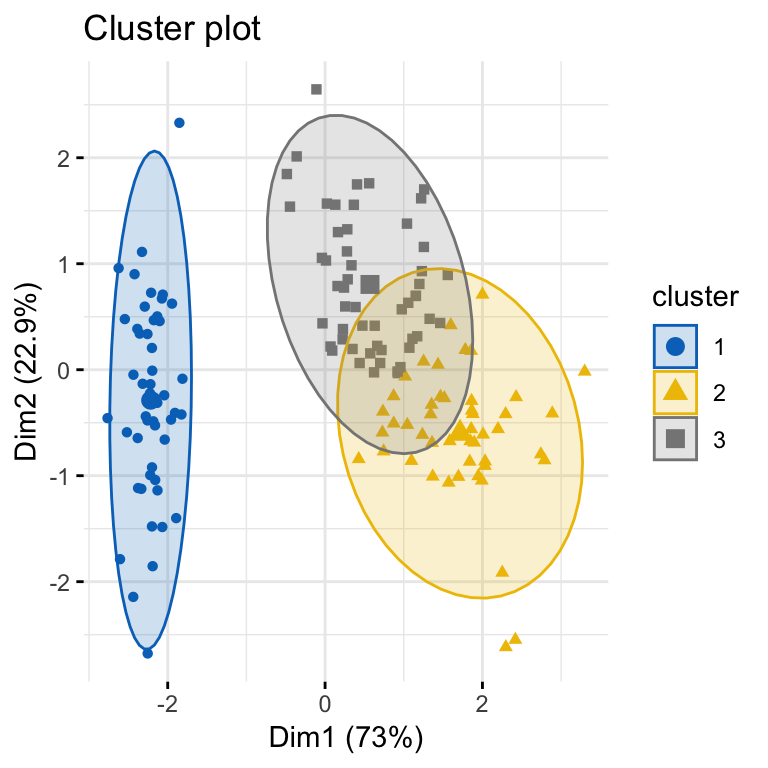 To compute a hierarchical clustering, use this: 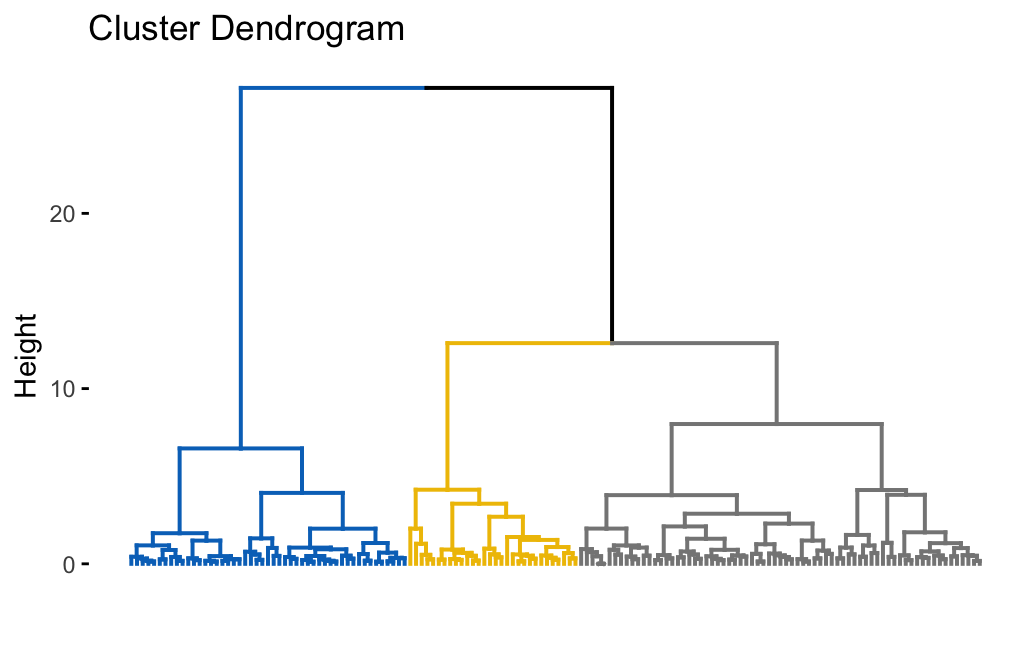 Recall that the silhouette coefficient (\(S_i\)) measures how similar an object \(i\) is to the the other objects in its own cluster versus those in the neighbor cluster. \(S_i\) values range from 1 to - 1:

It’s possible to draw silhouette coefficients of observations using the function fviz_silhouette() [factoextra package], which will also print a summary of the silhouette analysis output. To avoid this, you can use the option print.summary = FALSE.

Here, there are contents hidden to non-premium members. Sign up now to read all of our premium contents and to be awarded a certificate of course completion.
Claim Your Membership Now 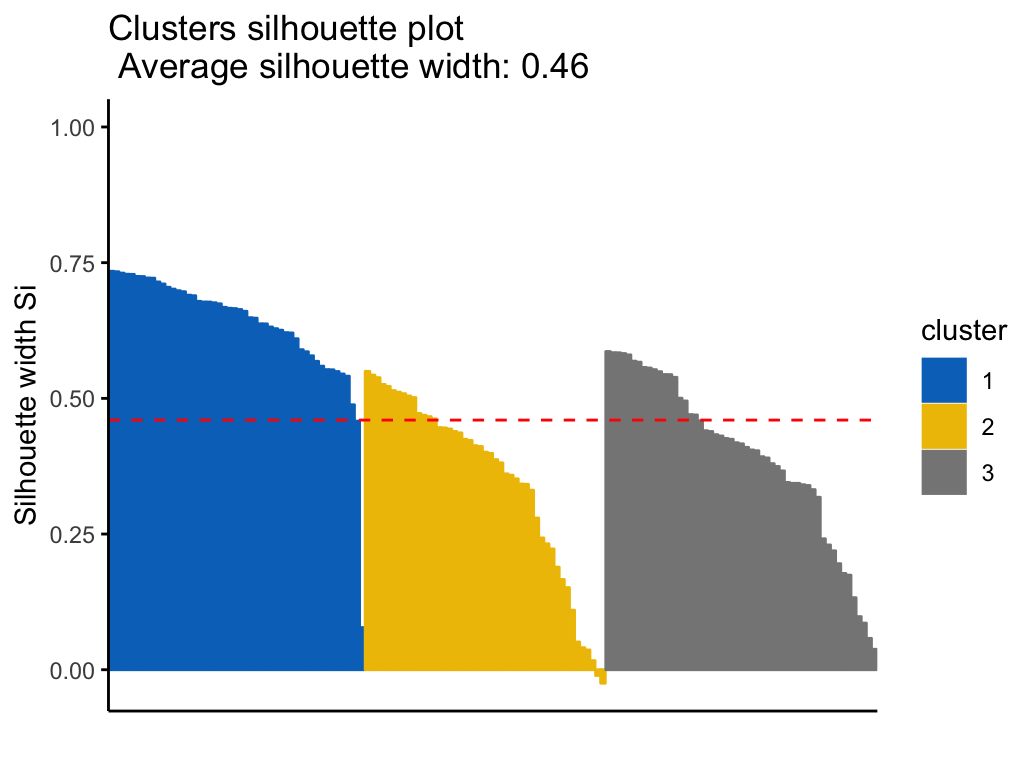 It can be seen that several samples, in cluster 2, have a negative silhouette coefficient. This means that they are not in the right cluster. We can find the name of these samples and determine the clusters they are closer (neighbor cluster), as follow:

The function cluster.stats() [fpc package] and the function NbClust() [in NbClust package] can be used to compute Dunn index and many other cluster validation statistics or indices.

The simplified format is:

The function cluster.stats() returns a list containing many components useful for analyzing the intrinsic characteristics of a clustering:

All the above elements can be used to evaluate the internal quality of clustering.

In the following sections, we’ll compute the clustering quality statistics for k-means. Look at the within.cluster.ss (within clusters sum of squares), the average.within (average distance within clusters) and clus.avg.silwidths (vector of cluster average silhouette widths).

To display all statistics, type this:

Read the documentation of cluster.stats() for details about all the available indices.

Among the values returned by the function cluster.stats(), there are two indexes to assess the similarity of two clustering, namely the corrected Rand index and Meila’s VI.

We know that the iris data contains exactly 3 groups of species.

Does the K-means clustering matches with the true structure of the data?

We can use the function cluster.stats() to answer to this question.

Let start by computing a cross-tabulation between k-means clusters and the reference Species labels:

It can be seen that:

It’s possible to quantify the agreement between Species and k-means clusters using either the corrected Rand index and Meila’s VI provided as follow:

The corrected Rand index provides a measure for assessing the similarity between two partitions, adjusted for chance. Its range is -1 (no agreement) to 1 (perfect agreement). Agreement between the specie types and the cluster solution is 0.62 using Rand index and 0.748 using Meila’s VI.

The same analysis can be computed for both PAM and hierarchical clustering:

External clustering validation, can be used to select suitable clustering algorithm for a given data set.

We described how to validate clustering results using the silhouette method and the Dunn index. This task is facilitated using the combination of two R functions: eclust() and fviz_silhouette in the factoextra package We also demonstrated how to assess the agreement between a clustering result and an external reference.
In the next chapters, we’ll show how to i) choose the appropriate clustering algorithm for your data; and ii) computing p-values for hierarchical clustering.

Determining The Optimal Number Of Clusters: 3 Must Know Methods (Prev Lesson)
(Next Lesson) Choosing the Best Clustering Algorithms
Back to Cluster Validation Essentials