Partitional Clustering in R: The Essentials

Partitional Clustering in R: The Essentials

The k-medoids algorithm is a clustering approach related to k-means clustering for partitioning a data set into k groups or clusters. In k-medoids clustering, each cluster is represented by one of the data point in the cluster. These points are named cluster medoids.

The term medoid refers to an object within a cluster for which average dissimilarity between it and all the other the members of the cluster is minimal. It corresponds to the most centrally located point in the cluster. These objects (one per cluster) can be considered as a representative example of the members of that cluster which may be useful in some situations. Recall that, in k-means clustering, the center of a given cluster is calculated as the mean value of all the data points in the cluster.

K-medoid is a robust alternative to k-means clustering. This means that, the algorithm is less sensitive to noise and outliers, compared to k-means, because it uses medoids as cluster centers instead of means (used in k-means).

The k-medoids algorithm requires the user to specify k, the number of clusters to be generated (like in k-means clustering). A useful approach to determine the optimal number of clusters is the silhouette method, described in the next sections.

The most common k-medoids clustering methods is the PAM algorithm (Partitioning Around Medoids, (Kaufman and Rousseeuw 1990)).

In this article, We’ll describe the PAM algorithm and show how to compute PAM in R software.

In the next article, we’ll also discuss a variant of PAM named CLARA (Clustering Large Applications) which is used for analyzing large data sets.

The use of means implies that k-means clustering is highly sensitive to outliers. This can severely affects the assignment of observations to clusters. A more robust algorithm is provided by the PAM algorithm.

The PAM algorithm is based on the search for k representative objects or medoids among the observations of the data set.

In summary, PAM algorithm proceeds in two phases as follow:

Swap phase:
4. For each cluster search if any of the object of the cluster decreases the average dissimilarity coefficient; if it does, select the entity that decreases this coefficient the most as the medoid for this cluster; 5. If at least one medoid has changed go to (3), else end the algorithm.

As mentioned above, the PAM algorithm works with a matrix of dissimilarity, and to compute this matrix the algorithm can use two metrics:

Note that, in practice, you should get similar results most of the time, using either euclidean or Manhattan distance. If your data contains outliers, Manhattan distance should give more robust results, whereas euclidean would be influenced by unusual values.

We’ll use the demo data sets “USArrests”, which we start by scaling (Chapter data preparation and R packages) using the R function scale() as follow:

The function pam() [cluster package] and pamk() [fpc package] can be used to compute PAM.

The function pamk() does not require a user to decide the number of clusters K.

In the following examples, we’ll describe only the function pam(), which simplified format is:

To create a beautiful graph of the clusters generated with the pam() function, will use the factoextra package.

Estimating the optimal number of clusters 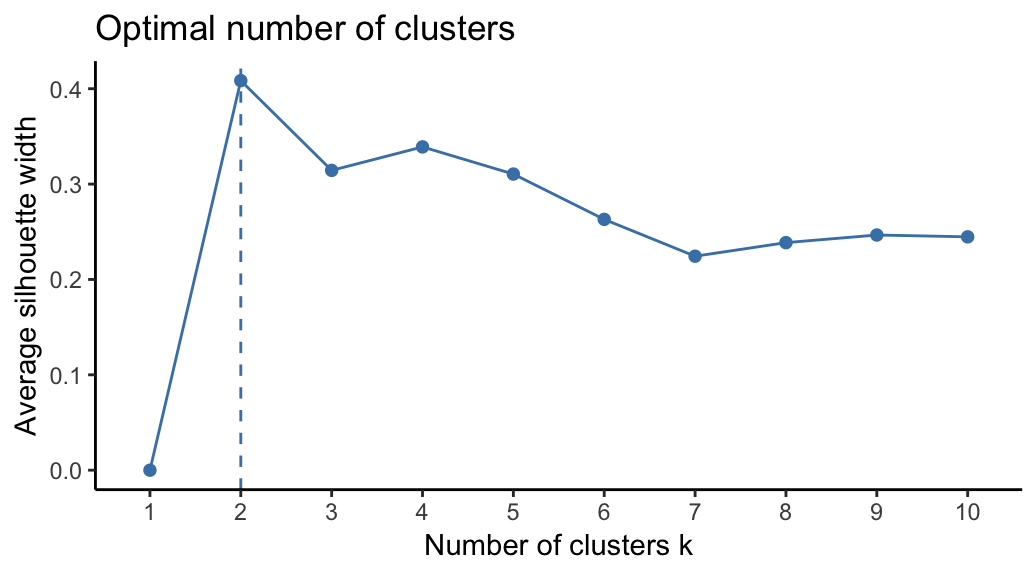 From the plot, the suggested number of clusters is 2. In the next section, we’ll classify the observations into 2 clusters.

The R code below computes PAM algorithm with k = 2:

If you want to add the point classifications to the original data, use this:

Accessing to the results of the pam() function

The function pam() returns an object of class pam which components include:

To visualize the partitioning results, we’ll use the function fviz_cluster() [factoextra package]. It draws a scatter plot of data points colored by cluster numbers. If the data contains more than 2 variables, the Principal Component Analysis (PCA) algorithm is used to reduce the dimensionality of the data. In this case, the first two principal dimensions are used to plot the data. 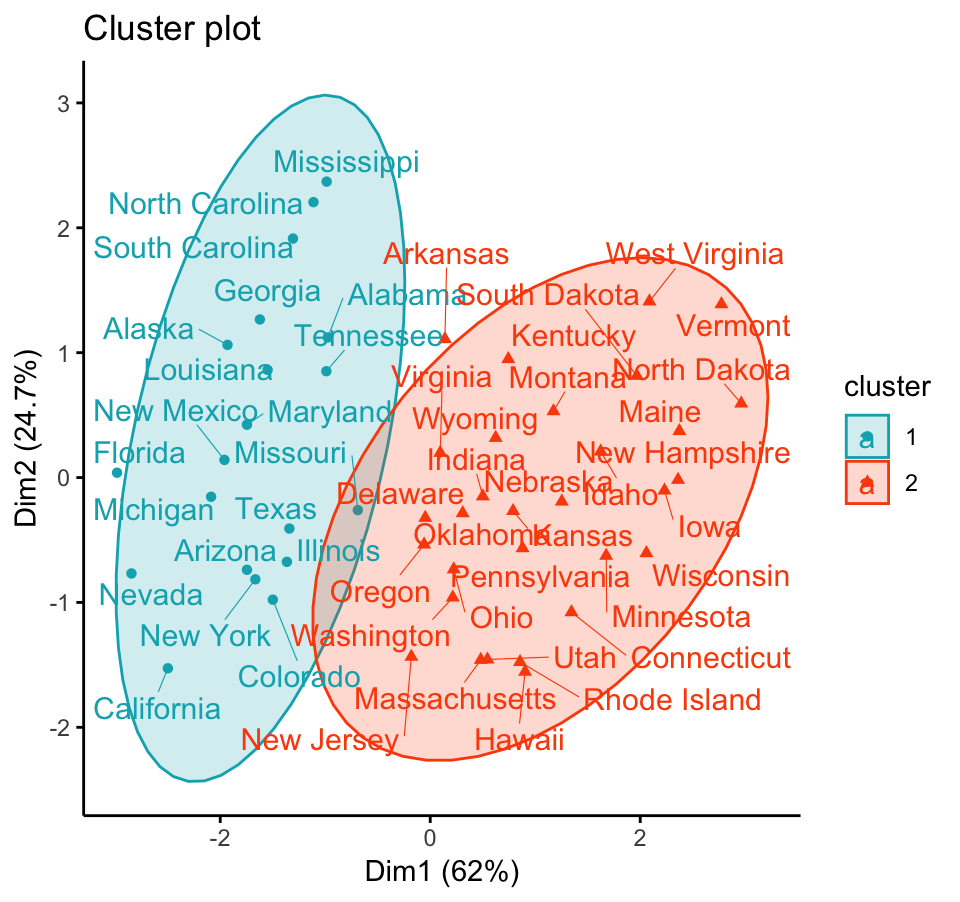 The K-medoids algorithm, PAM, is a robust alternative to k-means for partitioning a data set into clusters of observation.

The PAM algorithm requires the user to know the data and to indicate the appropriate number of clusters to be produced. This can be estimated using the function fviz_nbclust [in factoextra R package].

The R function pam() [cluster package] can be used to compute PAM algorithm. The simplified format is pam(x, k), where “x” is the data and k is the number of clusters to be generated.

After, performing PAM clustering, the R function fviz_cluster() [factoextra package] can be used to visualize the results. The format is fviz_cluster(pam.res), where pam.res is the PAM results.

Note that, for large data sets, pam() may need too much memory or too much computation time. In this case, the function clara() is preferable. This should not be a problem for modern computers.