DBSCAN (Density-Based Spatial Clustering and Application with Noise), is a density-based clusering algorithm (Ester et al. 1996), which can be used to identify clusters of any shape in a data set containing noise and outliers.

The basic idea behind the density-based clustering approach is derived from a human intuitive clustering method. For instance, by looking at the figure below, one can easily identify four clusters along with several points of noise, because of the differences in the density of points.

Clusters are dense regions in the data space, separated by regions of lower density of points. The DBSCAN algorithm is based on this intuitive notion of “clusters” and “noise”. The key idea is that for each point of a cluster, the neighborhood of a given radius has to contain at least a minimum number of points.

In this chapter, we’ll describe the DBSCAN algorithm and demonstrate how to compute DBSCAN using the fpc R package.

Partitioning methods (K-means, PAM clustering) and hierarchical clustering are suitable for finding spherical-shaped clusters or convex clusters. In other words, they work well only for compact and well separated clusters. Moreover, they are also severely affected by the presence of noise and outliers in the data.

Unfortunately, real life data can contain: i) clusters of arbitrary shape such as those shown in the figure below (oval, linear and “S” shape clusters); ii) many outliers and noise.

The figure below shows a data set containing nonconvex clusters and outliers/noises. The simulated data set multishapes [in factoextra package] is used. 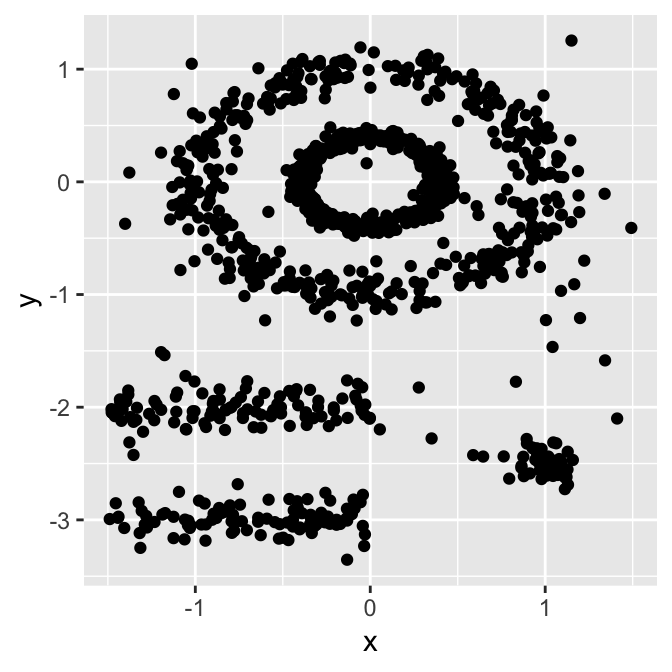 The plot above contains 5 clusters and outliers, including:

Given such data, k-means algorithm has difficulties for identifying theses clusters with arbitrary shapes. To illustrate this situation, the following R code computes k-means algorithm on the multishapes data set. The function fviz_cluster()[factoextra package] is used to visualize the clusters.

We know there are 5 five clusters in the data, but it can be seen that k-means method inaccurately identify the 5 clusters.

The goal is to identify dense regions, which can be measured by the number of objects close to a given point.

Two important parameters are required for DBSCAN: epsilon (“eps”) and minimum points (“MinPts”). The parameter eps defines the radius of neighborhood around a point x. It’s called called the \(\epsilon\)-neighborhood of x. The parameter MinPts is the minimum number of neighbors within “eps” radius.

Any point x in the data set, with a neighbor count greater than or equal to MinPts, is marked as a core point. We say that x is border point, if the number of its neighbors is less than MinPts, but it belongs to the \(\epsilon\)-neighborhood of some core point z. Finally, if a point is neither a core nor a border point, then it is called a noise point or an outlier.

We start by defining 3 terms, required for understanding the DBSCAN algorithm:

Those points that do not belong to any cluster are treated as outliers or noise.

Here, we’ll use the R package fpc to compute DBSCAN. It’s also possible to use the package dbscan, which provides a faster re-implementation of DBSCAN algorithm compared to the fpc package.

We’ll also use the factoextra package for visualizing clusters. 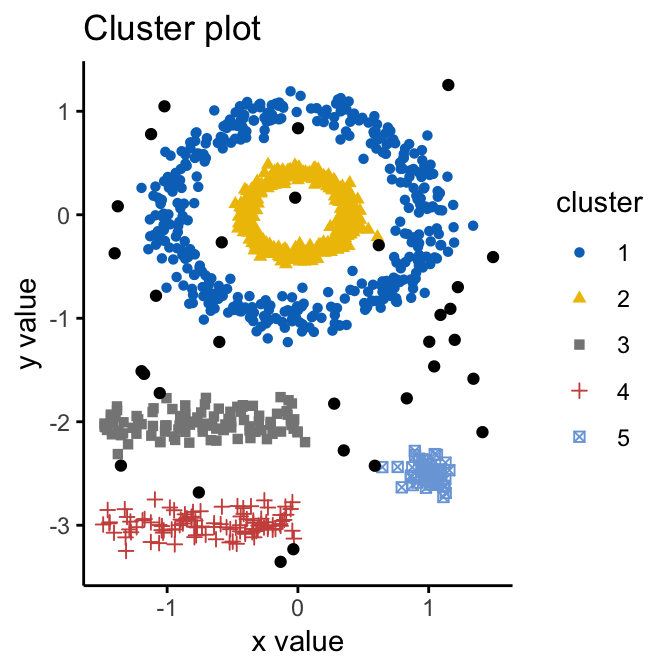 It can be seen that DBSCAN performs better for these data sets and can identify the correct set of clusters compared to k-means algorithms.

The result of the fpc::dbscan() function can be displayed as follow:

In the table above, column names are cluster number. Cluster 0 corresponds to outliers (black points in the DBSCAN plot). The function print.dbscan() shows a statistic of the number of points belonging to the clusters that are seeds and border points.

A natural question is:

How to define the optimal value of ?

The method proposed here consists of computing the k-nearest neighbor distances in a matrix of points.

The idea is to calculate, the average of the distances of every point to its k nearest neighbors. The value of k will be specified by the user and corresponds to MinPts.

Next, these k-distances are plotted in an ascending order. The aim is to determine the “knee”, which corresponds to the optimal eps parameter.

A knee corresponds to a threshold where a sharp change occurs along the k-distance curve.

The function kNNdistplot() [in dbscan package] can be used to draw the k-distance plot: 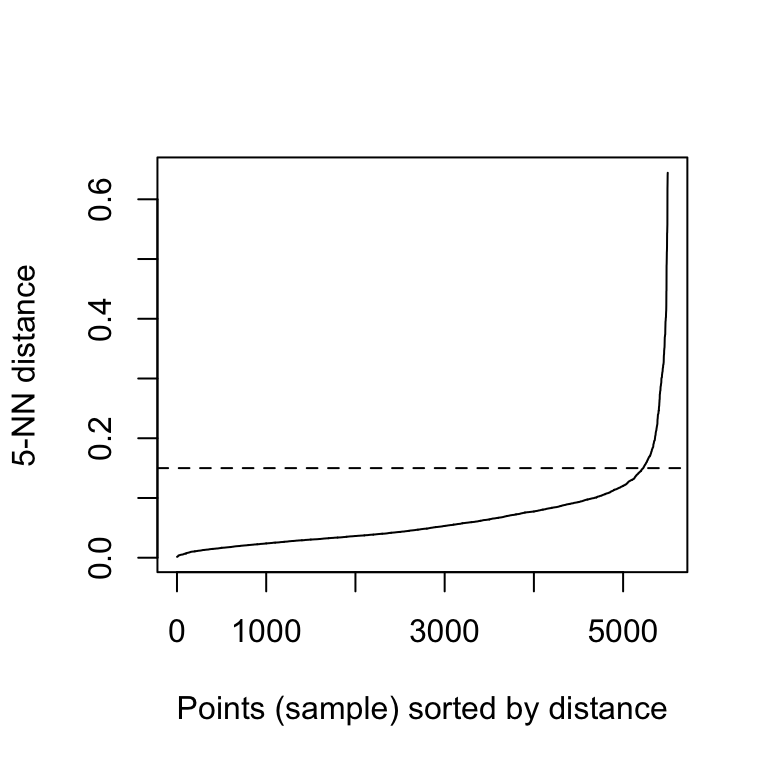 It can be seen that the optimal eps value is around a distance of 0.15.

The function predict.dbscan(object, data, newdata) [in fpc package] can be used to predict the clusters for the points in newdata. For more details, read the documentation (?predict.dbscan).