The traditional clustering methods, such as hierarchical clustering and k-means clustering, are heuristic and are not based on formal models. Furthermore, k-means algorithm is commonly randomnly initialized, so different runs of k-means will often yield different results. Additionally, k-means requires the user to specify the the optimal number of clusters.

An alternative is model-based clustering, which consider the data as coming from a distribution that is mixture of two or more clusters (Fraley and Raftery 2002, Fraley et al. (2012)). Unlike k-means, the model-based clustering uses a soft assignment, where each data point has a probability of belonging to each cluster.

In this chapter, we illustrate model-based clustering using the R package mclust.

In model-based clustering, the data is considered as coming from a mixture of density.

Each component (i.e. cluster) k is modeled by the normal or Gaussian distribution which is characterized by the parameters:

For example, consider the “old faithful geyser data” [in MASS R package], which can be illustrated as follow using the ggpubr R package: 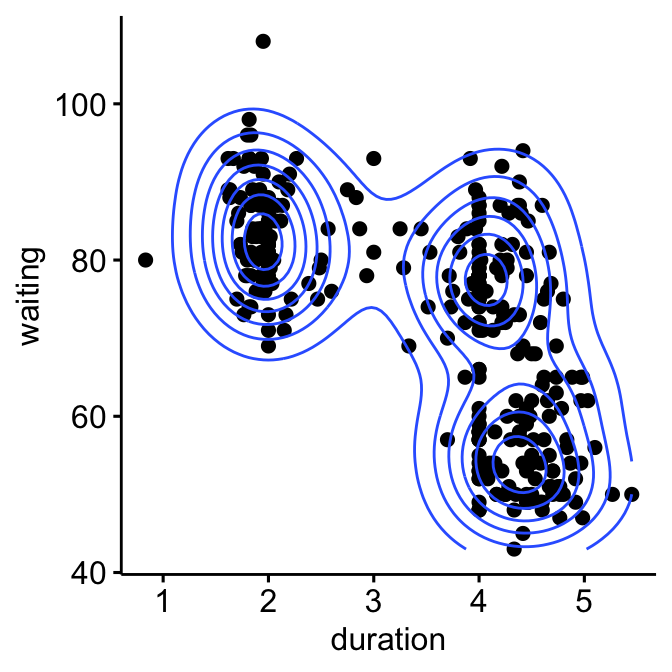 The plot above suggests at least 3 clusters in the mixture. The shape of each of the 3 clusters appears to be approximately elliptical suggesting three bivariate normal distributions. As the 3 ellipses seems to be similar in terms of volume, shape and orientation, we might anticipate that the three components of this mixture might have homogeneous covariance matrices.

The model parameters can be estimated using the Expectation-Maximization (EM) algorithm initialized by hierarchical model-based clustering. Each cluster k is centered at the means \(\mu_k\), with increased density for points near the mean.

Geometric features (shape, volume, orientation) of each cluster are determined by the covariance matrix \(\sum_k\).

The first identifier refers to volume, the second to shape and the third to orientation. E stands for “equal”, V for “variable” and I for “coordinate axes”.

The Mclust package uses maximum likelihood to fit all these models, with different covariance matrix parameterizations, for a range of k components.

The best model is selected using the Bayesian Information Criterion or BIC. A large BIC score indicates strong evidence for the corresponding model.

We start by installing the mclust package as follow: install.packages(“mclust”)

Note that, model-based clustering can be applied on univariate or multivariate data.

Here, we illustrate model-based clustering on the diabetes data set [mclust package] giving three measurements and the diagnosis for 145 subjects described as follow:

Model-based clustering can be computed using the function Mclust() as follow:

For this data, it can be seen that model-based clustering selected a model with three components (i.e. clusters). The optimal selected model name is VVV model. That is the three components are ellipsoidal with varying volume, shape, and orientation. The summary contains also the clustering table specifying the number of observations in each clusters.

Model-based clustering results can be drawn using the base function plot.Mclust() [in mclust package]. Here we’ll use the function fviz_mclust() [in factoextra package] to create beautiful plots based on ggplot2.

In the situation, where the data contain more than two variables, fviz_mclust() uses a principal component analysis to reduce the dimensionnality of the data. The first two principal components are used to produce a scatter plot of the data. However, if you want to plot the data using only two variables of interest, let say here c(“insulin”, “sspg”), you can specify that in the fviz_mclust() function using the argument choose.vars = c(“insulin”, “sspg”). 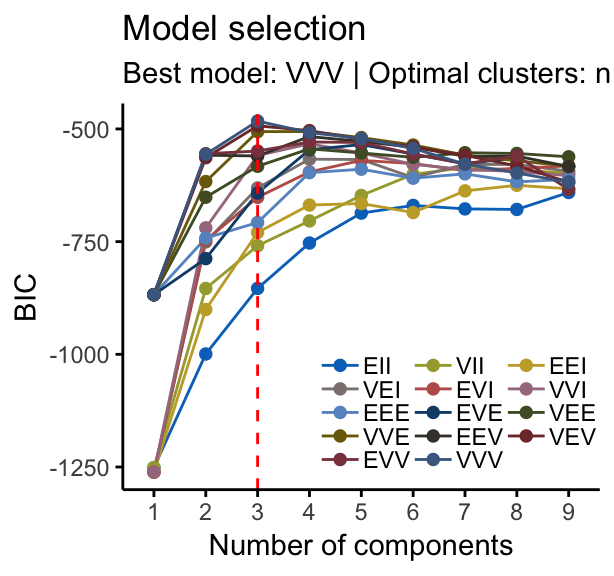 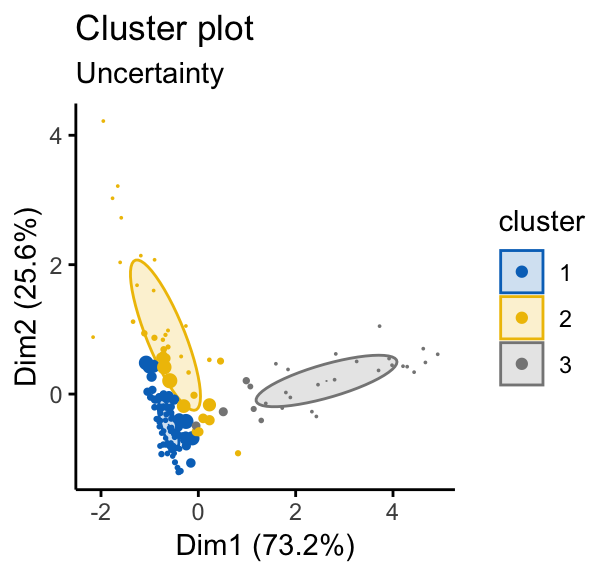 Note that, in the uncertainty plot, larger symbols indicate the more uncertain observations.