Hierarchical Clustering in R: The Essentials

Hierarchical Clustering in R: The Essentials

The agglomerative clustering is the most common type of hierarchical clustering used to group objects in clusters based on their similarity. It’s also known as AGNES (Agglomerative Nesting). The algorithm starts by treating each object as a singleton cluster. Next, pairs of clusters are successively merged until all clusters have been merged into one big cluster containing all objects. The result is a tree-based representation of the objects, named dendrogram.

In this article, we start by describing the agglomerative clustering algorithms. Next, we provide R lab sections with many examples for computing and visualizing hierarchical clustering. We continue by explaining how to interpret dendrogram. Finally, we provide R codes for cutting dendrograms into groups.

Agglomerative clustering works in a “bottom-up” manner. That is, each object is initially considered as a single-element cluster (leaf). At each step of the algorithm, the two clusters that are the most similar are combined into a new bigger cluster (nodes). This procedure is iterated until all points are member of just one single big cluster (root) (see figure below).

The inverse of agglomerative clustering is divisive clustering, which is also known as DIANA (Divise Analysis) and it works in a “top-down” manner. It begins with the root, in which all objects are included in a single cluster. At each step of iteration, the most heterogeneous cluster is divided into two. The process is iterated until all objects are in their own cluster (see figure below).

We’ll describe each of these steps in the next section.

The data should be a numeric matrix with:

Here, we’ll use the R base USArrests data sets.

Note that, it’s generally recommended to standardize variables in the data set before performing subsequent analysis. Standardization makes variables comparable, when they are measured in different scales. For example one variable can measure the height in meter and another variable can measure the weight in kg. The R function scale() can be used for standardization, See ?scale documentation.

In order to decide which objects/clusters should be combined or divided, we need methods for measuring the similarity between objects.

There are many methods to calculate the (dis)similarity information, including Euclidean and manhattan distances. In R software, you can use the function dist() to compute the distance between every pair of object in a data set. The results of this computation is known as a distance or dissimilarity matrix.

By default, the function dist() computes the Euclidean distance between objects; however, it’s possible to indicate other metrics using the argument method. See ?dist for more information.

For example, consider the R base data set USArrests, you can compute the distance matrix as follow:

Note that, the function dist() computes the distance between the rows of a data matrix using the specified distance measure method.

The R code below displays the first 6 rows and columns of the distance matrix:

The linkage function takes the distance information, returned by the function dist(), and groups pairs of objects into clusters based on their similarity. Next, these newly formed clusters are linked to each other to create bigger clusters. This process is iterated until all the objects in the original data set are linked together in a hierarchical tree.

For example, given a distance matrix “res.dist” generated by the function dist(), the R base function hclust() can be used to create the hierarchical tree.

Note that, at each stage of the clustering process the two clusters, that have the smallest linkage distance, are linked together.

Dendrograms correspond to the graphical representation of the hierarchical tree generated by the function hclust(). Dendrogram can be produced in R using the base function plot(res.hc), where res.hc is the output of hclust(). Here, we’ll use the function fviz_dend()[ in factoextra R package] to produce a beautiful dendrogram.

First install factoextra by typing this: install.packages(“factoextra”); next visualize the dendrogram as follow:

In the dendrogram displayed above, each leaf corresponds to one object. As we move up the tree, objects that are similar to each other are combined into branches, which are themselves fused at a higher height.

In order to identify sub-groups, we can cut the dendrogram at a certain height as described in the next sections.

After linking the objects in a data set into a hierarchical cluster tree, you might want to assess that the distances (i.e., heights) in the tree reflect the original distances accurately.

The closer the value of the correlation coefficient is to 1, the more accurately the clustering solution reflects your data. Values above 0.75 are felt to be good. The “average” linkage method appears to produce high values of this statistic. This may be one reason that it is so popular.

The R base function cophenetic() can be used to compute the cophenetic distances for hierarchical clustering.

The correlation coefficient shows that using a different linkage method creates a tree that represents the original distances slightly better.

Cut the dendrogram into different groups

One of the problems with hierarchical clustering is that, it does not tell us how many clusters there are, or where to cut the dendrogram to form clusters.

You can cut the hierarchical tree at a given height in order to partition your data into clusters. The R base function cutree() can be used to cut a tree, generated by the hclust() function, into several groups either by specifying the desired number of groups or the cut height. It returns a vector containing the cluster number of each observation.

The result of the cuts can be visualized easily using the function fviz_dend() [in factoextra]: 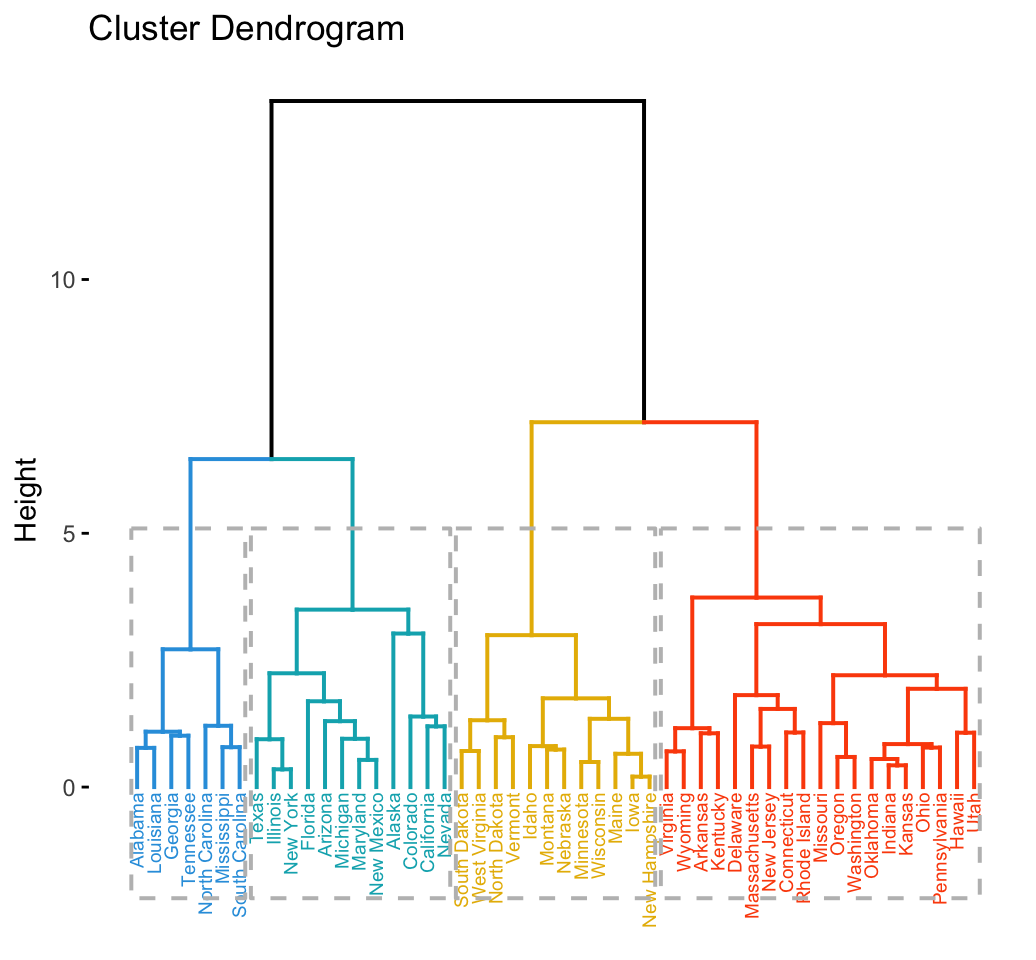 Using the function fviz_cluster() [in factoextra], we can also visualize the result in a scatter plot. Observations are represented by points in the plot, using principal components. A frame is drawn around each cluster. 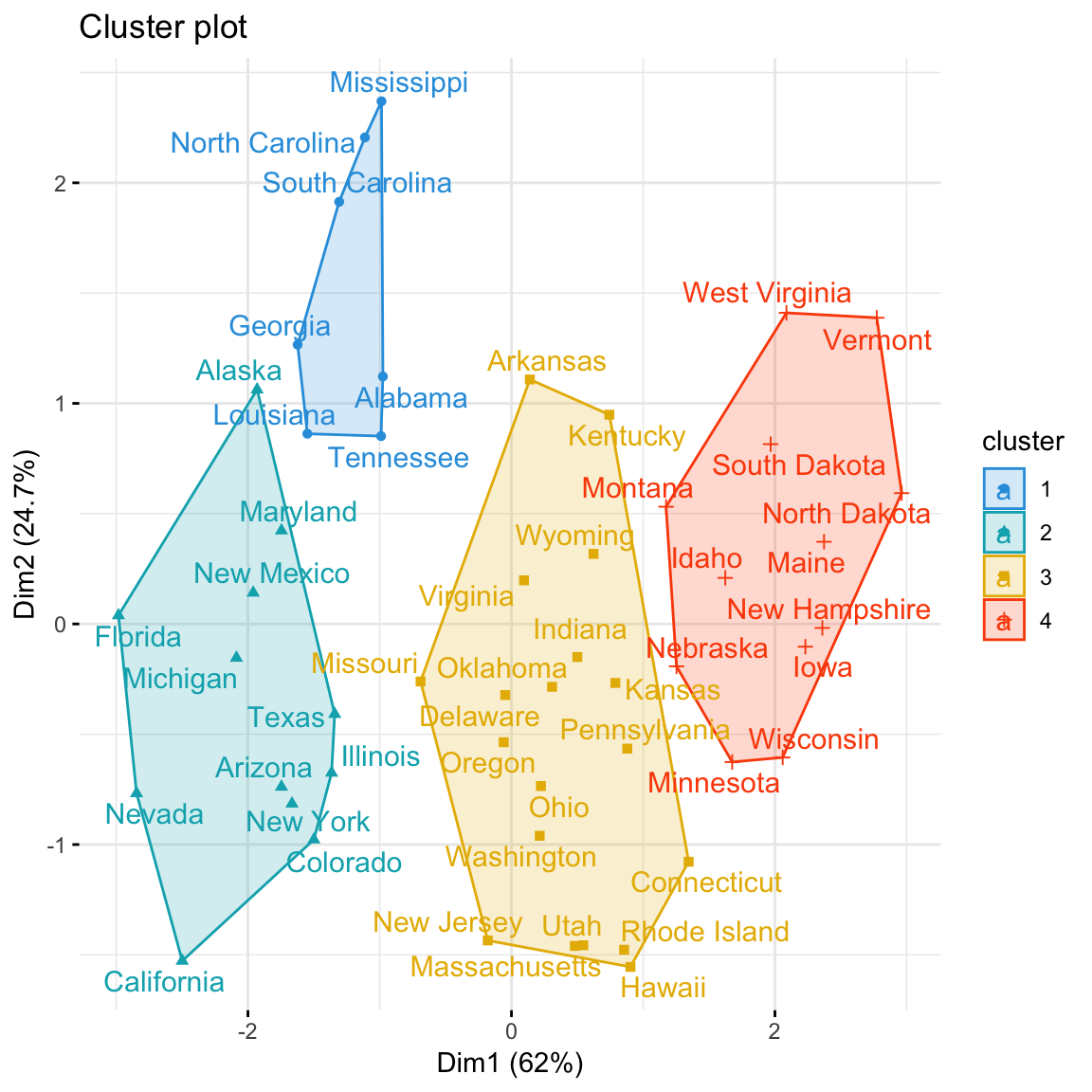 The R package cluster makes it easy to perform cluster analysis in R. It provides the function agnes() and diana() for computing agglomerative and divisive clustering, respectively. These functions perform all the necessary steps for you. You don’t need to execute the scale(), dist() and hclust() function separately.

After running agnes() and diana(), you can use the function fviz_dend()[in factoextra] to visualize the output:

In gene expression data analysis, clustering is generaly used as one of the first step to explore the data. We are interested in whether there are groups of genes or groups of samples that have similar gene expression patterns.

Several clustering distance measures have been described for assessing the similarity or the dissimilarity between items, in order to decide which items have to be grouped together or not. These measures can be used to cluster genes or samples that are similar.

For most common clustering softwares, the default distance measure is the Euclidean distance. The most popular methods for gene expression data are to use log2(expression + 0.25), correlation distance and complete linkage clustering agglomerative-clustering.

Single and Complete linkage give the same dendrogram whether you use the raw data, the log of the data or any other transformation of the data that preserves the order because what matters is which ones have the smallest distance. The other methods are sensitive to the measurement scale.

Note that, when the data are scaled, the Euclidean distance of the z-scores is the same as correlation distance.

In principle it is possible to cluster all the genes, although visualizing a huge dendrogram might be problematic. Usually, some type of preliminary analysis, such as differential expression analysis is used to select genes for clustering.

Selecting genes based on differential expression analysis removes genes which are likely to have only chance patterns. This should enhance the patterns found in the gene clusters.

Hierarchical clustering is a cluster analysis method, which produce a tree-based representation (i.e.: dendrogram) of a data. Objects in the dendrogram are linked together based on their similarity.

To perform hierarchical cluster analysis in R, the first step is to calculate the pairwise distance matrix using the function dist(). Next, the result of this computation is used by the hclust() function to produce the hierarchical tree. Finally, you can use the function fviz_dend() [in factoextra R package] to plot easily a beautiful dendrogram.

It’s also possible to cut the tree at a given height for partitioning the data into multiple groups (R function cutree()).