The Multivariate Analysis Of Variance (MANOVA) is an ANOVA with two or more continuous outcome (or response) variables.

For example, we may conduct an experiment where we give two treatments (A and B) to two groups of mice, and we are interested in the weight and height of mice. In that case, the weight and height of mice are our outcome (or dependent) variables, and our hypothesis is that both together are affected by the difference in treatment. A multivariate analysis of variance could be used to test this hypothesis.

The procedure of MANOVA can be summarized as follow:

This article describes how to compute one-way MANOVA in R.

Note that, MANOVA is appropriate in experimental situations, where we have several outcome (dependent) variables which all measure different aspects of some cohesive theme. For example, several exam scores to have a measure of overall academic performance.

Make sure that you have installed the following R packages:

The R code below creates a merged box plots of Sepal.Length and Petal.Length by Species groups. 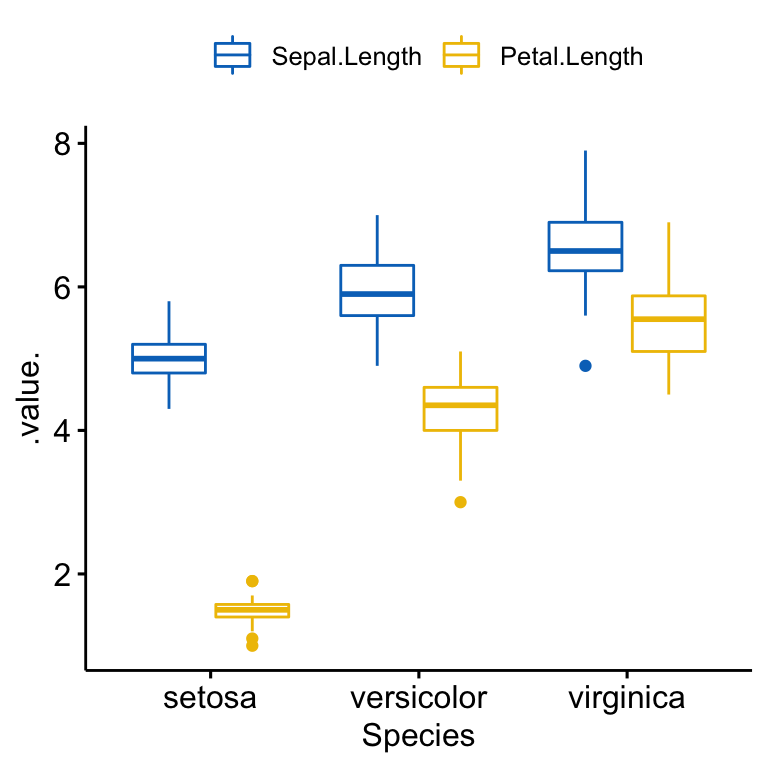 MANOVA makes the following assumptions about the data:

As the table above shows 50 observations per group, the assumption of adequate sample size is satisfied.

Group the data by Species and then, identify outliers in the Sepal.Length variable:

Group the data by Species and then, identify outliers in the Petal.Length variable:

There were no univariate extreme outliers in the Sepal.Length and Petal.length variable, as assessed by box plot methods.

Yo can include the outlier in the analysis anyway if you do not believe the result will be substantially affected. This can be evaluated by comparing the result of the MANOVA with and without the outlier.

Remember to report in your written results section any decisions you make regarding any outliers you find.

Multivariate outliers are data points that have an unusual combination of values on the outcome (or dependent) variables.

In MANOVA setting, the Mahalanobis distance is generally used to detect multivariate outliers. The distance tells us how far an observation is from the center of the cloud, taking into account the shape (covariance) of the cloud as well.

The function mahalanobis_distance() [rstatix package] can be easily used to compute the Mahalanobis distance and to flag multivariate outliers. Read more in the documentation of the function.

This metric needs to be calculated by groups:

There were no multivariate outliers in the data, as assessed by Mahalanobis distance (p > 0.001).

If you have multivariate outliers, you could consider running MANOVA before and after removing the outlier to check whether or not their presence alter the results. You should report your final decision.

The normality assumption can be checked by computing Shapiro-Wilk test for each outcome variable at each level of the grouping variable. If the data is normally distributed, the p-value should be greater than 0.05.

Sepal.Length and Petal.length were normally distributed for each Species groups, as assessed by Shapiro-Wilk’s test (p > 0.05).

You can also create QQ plot for each group. QQ plot draws the correlation between a given data and the normal distribution.

All the points fall approximately along the reference line, for each group. So we can assume normality of the data.

In the situation where the assumptions are not met, you could consider running MANOVA on the data after transforming the outcome variables. You can also perform the test regardless as MANOVA is fairly robust to deviations from normality.

The test is not significant (p > 0.05), so we can assume multivariate normality.

Ideally the correlation between the outcome variables should be moderate, not too high. A correlation above 0.9 is an indication of multicollinearity, which is problematic for MANOVA.

In other hand, if the correlation is too low, you should consider running separate one-way ANOVA for each outcome variable.

In the situation, where you have multicollinearity, you could consider removing one of the outcome variables that is highly correlated.

The pairwise relationship between the outcome variables should be linear for each group. This can be checked visually by creating a scatter plot matrix using the R function ggpairs() [GGally package]. In our example, we have only one pair: 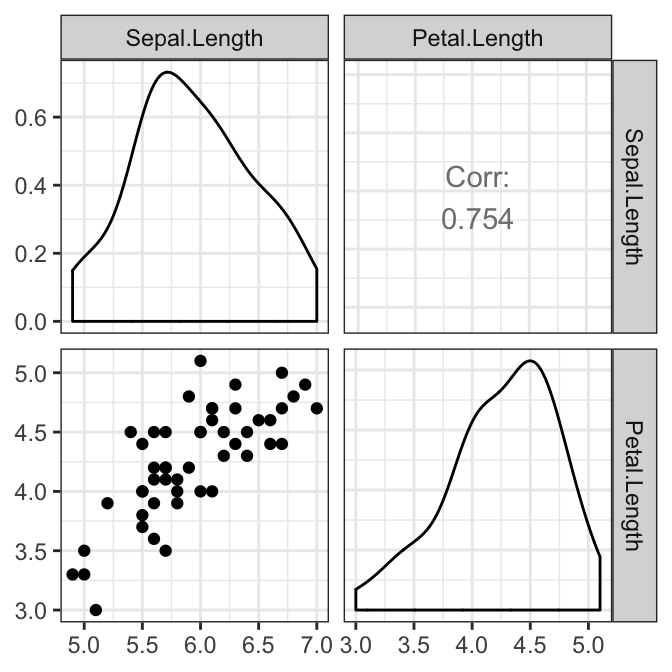 There was a linear relationship between Sepal.Length and Petal.Length in each Species group, as assessed by scatter plot.

In the situation, where you detect non-linear relationships, You can:

Check the homogeneity of covariances assumption

This can be evaluated using the Box’s M-test implemented in the rstatix package.

The test is statistically significant (i.e., p < 0.001), so the data have violated the assumption of homogeneity of variance-covariance matrices.

Note that, if you have balanced design (i.e., groups with similar sizes), you don’t need to worry too much about violation of the homogeneity of variances-covariance matrices and you can continue your analysis.

However, having an unbalanced design is problematic. Possible solutions include: 1) transforming the dependent variables; 2) running the test anyway, but using Pillai’s multivariate statistic instead of Wilks’ statistic.

Check the homogneity of variance assumption

For each of the outcome variables, the one-way MANOVA assumes that there are equal variances between groups. This can be checked using the Levene’s test of equality of variances. Key R function: levene_test() [rstatix package].

The Levene’s test is significant (p < 0.05), so there was no homogeneity of variances.

Note that, if you do not have homogeneity of variances, you can try to transform the outcome (dependent) variable to correct for the unequal variances.

Alternatively, you can continue, but accept a lower level of statistical significance (alpha level) for your MANOVA result. Additionally, any follow-up univariate ANOVAs will need to be corrected for this violation (i.e., you will need to use different post-hoc tests).

There are four different types of multivariate statistics that can be used for computing MANOVA. These are: “Pillai”, “Wilks”, “Hotelling-Lawley”, or “Roy”.

The most commonly recommended multivariate statistic to use is Wilks’ Lambda.

However, Pillai’s Trace is more robust and is recommended when you have unbalanced design and also have a statistically significant Box’s M result (as in our example, see previous section).

Note that, “Pillai” is the default in the R Manova() function [car package].

Note that, there are different R function to compute one-way ANOVA depending whether the assumptions are met or not:

The following R codes shows how to use each of these functions:

Here, we show the results of anova_test():

Note that, as we have two dependent variables, we need to apply Bonferroni multiple testing correction by decreasing the he level we declare statistical significance.

This is done by dividing classic alpha level (0.05) by the number of tests (or dependent variables, here 2). This leads to a significance acceptance criteria of p < 0.025 rather than p < 0.05 because there are two dependent variables.

A statistically significant univariate ANOVA can be followed up by multiple pairwise comparisons to determine which groups are different.

The R functions tukey_hsd() [rstatix package] can be used to compute Tukey post-hoc tests if the homogeneity of variance assumption is met.

If you had violated the assumption of homogeneity of variances, as in our example, you might prefer to run a Games-Howell post-hoc test. It’s also possible to use the function pairwise_t_test() [rstatix] with the option pool.sd = FALSE and var.equal = FALSE .

All pairwise comparisons were significant for each of the outcome variable (Sepal.Length and Petal.Length).

A one-way multivariate analysis of variance was performed to determine the effect of iris Species on Sepal.Length and Petal.Length. There are three different species: setosa, versicolor and virginica.

All pairwise comparisons between groups were significant for each of the outcome variable (Sepal.Length and Petal.Length).

This article describes how to compute and interpret one-way MANOVA in R. We show how to check the test assumptions and to perform post-hoc analyses.