The unpaired t-test is used to compare the mean of two independent groups. It’s also known as:

For example, you might want to compare the average weights of individuals grouped by gender: male and female groups, which are two unrelated/independent groups.

As a rule of thumb, your study should have six or more participants in each group in order to proceed with an unpaired t-test, but ideally you would have more. An independent-samples t-test will run with less than six participants, but your ability to generalize to a larger population will be more difficult.

By default, R computes the Welch t-test, which is the safer one. The two methods give very similar results unless both the group sizes and the standard deviations are very different.

In this article, you will learn how to:

The classical Student’s t-test is more restrictive. It assumes that the two groups have the same population variance.

where, \(S_A\) and \(S_B\) are the standard deviation of the the two groups A and B, respectively.

Unlike the classic Student’s t-test, the Welch t-test formula involves the variance of each of the two groups (\(S_A^2\) and \(S_B^2\)) being compared. In other words, it does not use the pooled variance \(S\).

The degrees of freedom of Welch t-test is estimated as follow : 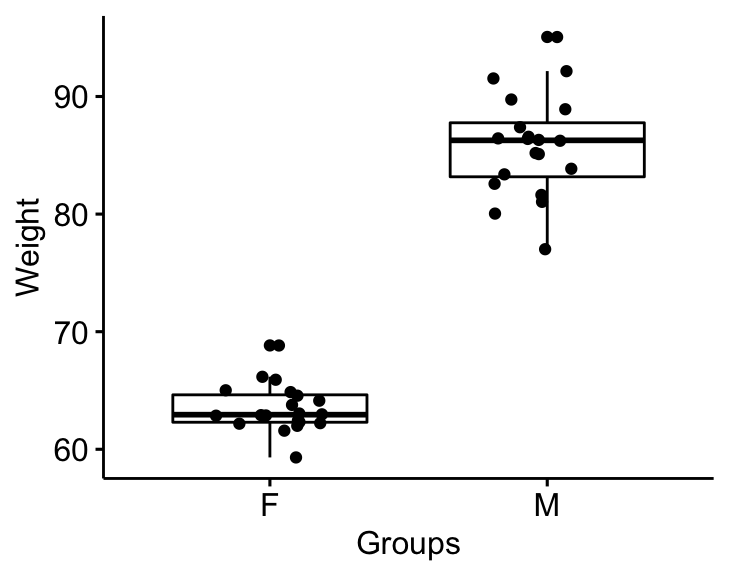 The two-samples independent t-test assume the following characteristics about the data:

Yo can include the outlier in the analysis anyway if you do not believe the result will be substantially affected. This can be evaluated by comparing the result of the t-test with and without the outlier. 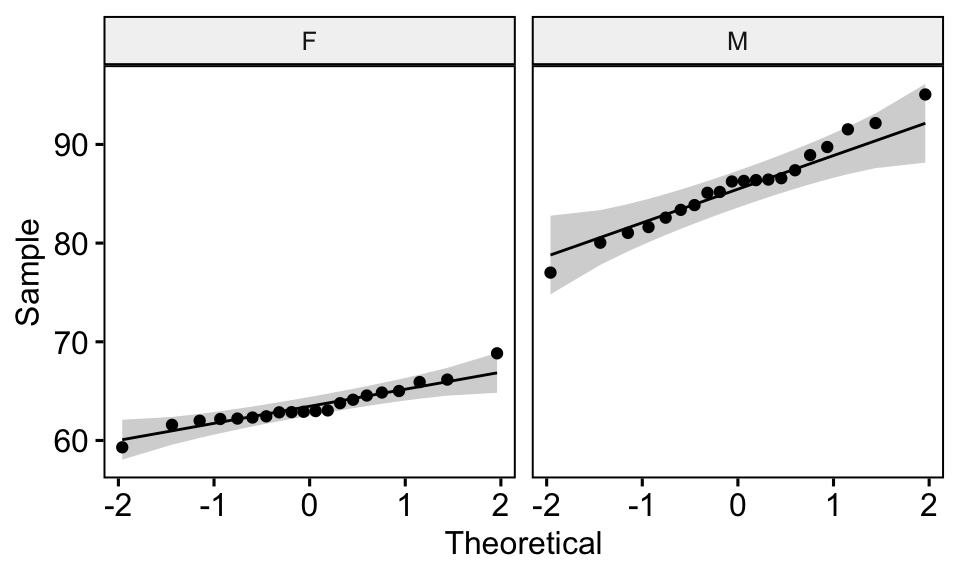 Note that, in the situation where the data are not normally distributed, it’s recommended to use the non parametric two-samples Wilcoxon test.

We want to know, whether the average weights are different between groups.

Recall that, by default, R computes the Welch t-test, which is the safer one. This is the test where you do not assume that the variance is the same in the two groups, which results in the fractional degrees of freedom.

If you want to assume the equality of variances (Student t-test), specify the option var.equal = TRUE:

Note that, to compute one tailed two samples t-test, you can specify the option alternative as follow.

There are multiple version of Cohen’s d for Student t-test. The most commonly used version of the Student t-test effect size, comparing two groups (A and B), is calculated by dividing the mean difference between the groups by the pooled standard deviation.

Calculation. If the option var.equal = TRUE, then the pooled SD is used when computing the Cohen’s d.

Note that, for small sample size (< 50), the Cohen’s d tends to over-inflate results. There exists a Hedge’s Corrected version of the Cohen’s d (Hedges and Olkin 1985), which reduces effect sizes for small samples by a few percentage points. The correction is introduced by multiplying the usual value of d by (N-3)/(N-2.25) (for unpaired t-test) and by (n1-2)/(n1-1.25) for paired t-test; where N is the total size of the two groups being compared (N = n1 + n2).

The Welch test is a variant of t-test used when the equality of variance can’t be assumed. The effect size can be computed by dividing the mean difference between the groups by the “averaged” standard deviation.

Note that, when group sizes are equal and group variances are homogeneous, Cohen’s d for the standard Student and Welch t-tests are identical. 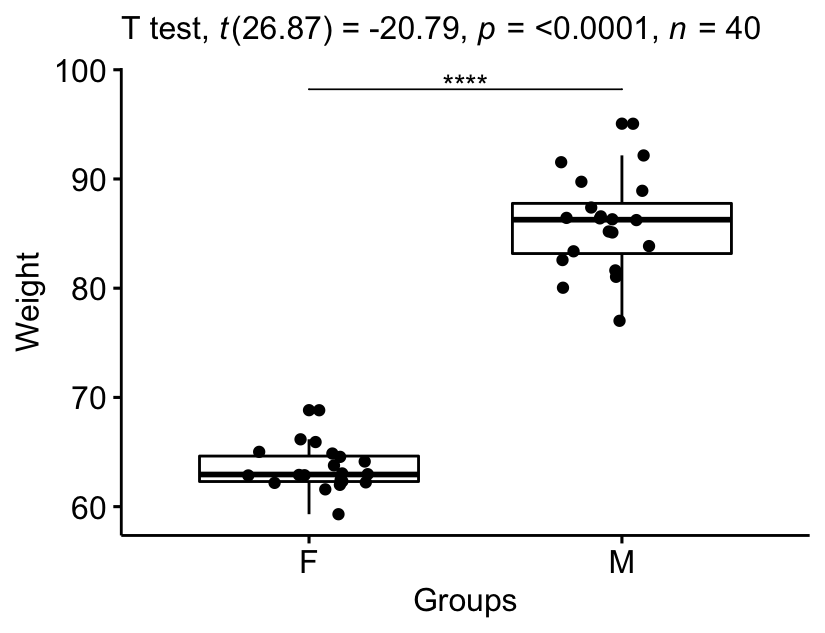 This article describes the formula and the basics of the unpaired t-test or independent t-test. Examples of R codes are provided to check the assumptions, computing the test and the effect size, interpreting and reporting the results.